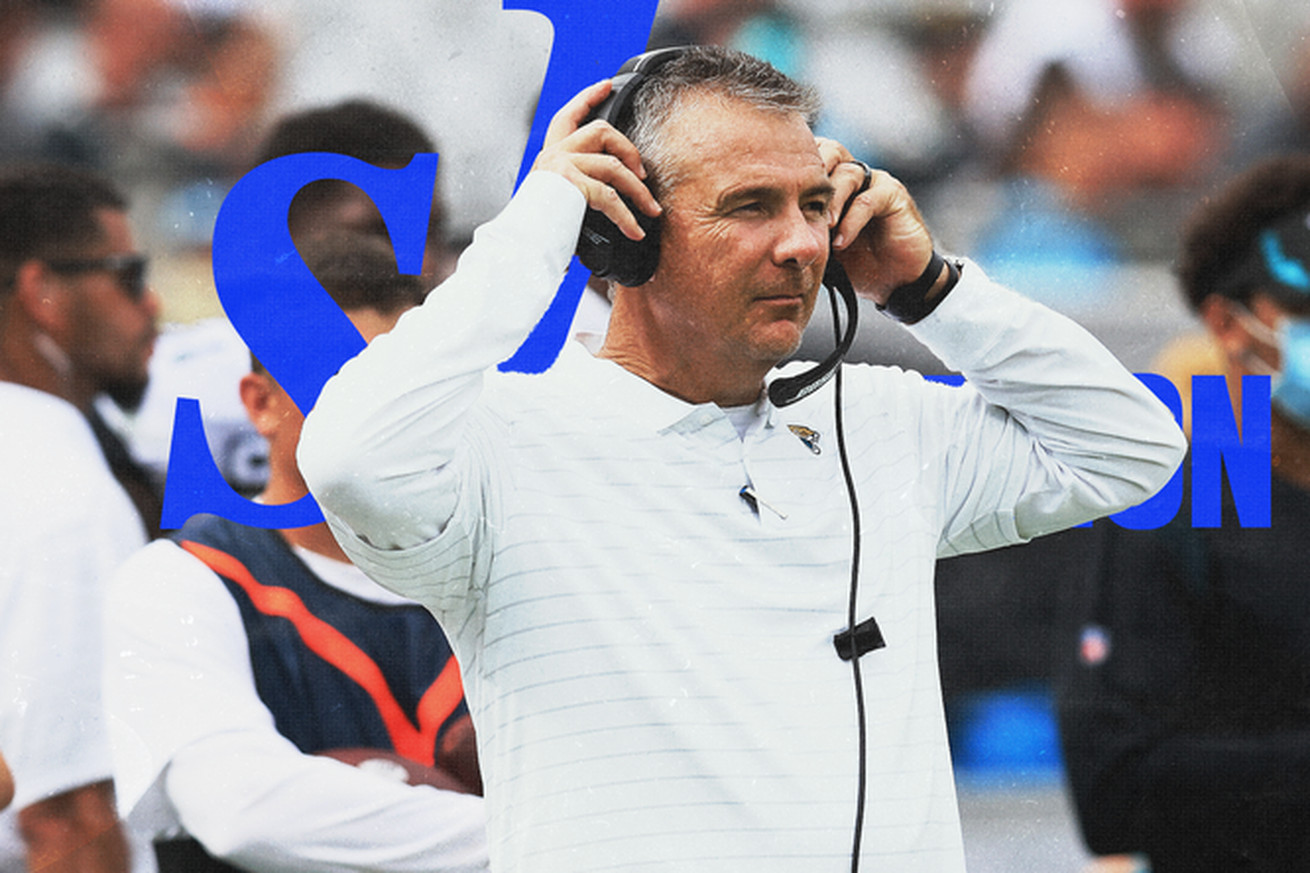 How did this mess begin, and where is it headed?

I regret to inform you that the Jaguars are a mess again. Normally it takes a few months into the season to reach this determination, but the 2021 team is on a breakneck pace to destroy themselves.

It begins and ends with Urban Meyer, the controversial coaching hire that set all this in motion. While it’s still early in the season, it’s feeling increasingly impossible that there’s any kind of happy ending in Jacksonville. So let’s stroll down disappointing memory lane to see how we reached this point.

The decision by Jacksonville to hire Urban Meyer came quickly, and before the Jaguars had finalized the hiring of Trent Baalke as general manager — who was still operating in an interim status.

Concerns over Meyer extended far beyond his football acumen, and into his departure from Ohio State. Prior to the start of the 2018 season Meyer was placed on administrative leave following reports that the coach was aware of spousal abuse allegations against assistant coach Zach Smith, and chose to ignore them until it became clear the allegations would become public, at which point Smith was fired. Meyer was suspended for the first three games of the season after the Ohio State board of trustees found that he didn’t “uphold the values of the university.”

Following the 2018 season Meyer said he was retiring from coaching due to health concerns. This was similar to how the coach left Florida in 2010, which came shortly before allegations were made that Meyer created a “toxic culture” while at the university, and “broke” Florida football.

Despite these concerns, the Jaguars pressed forward, touting his success in college and branding Meyer as the right man to lead their young team.

Using the first pick in the NFL Draft, the Jacksonville Jaguars select quarterback Trevor Lawrence from Clemson. Lawrence is widely regarded as the most polished pro prospect since Andrew Luck, and a can’t-miss talent at the position.

After a week of speculation the Jaguars sign Tim Tebow to a one year, $920,000 contract.

Billed as a tight end, the decision is almost universally panned. At this point Tebow had not played in the NFL in six years, and had no experience playing tight end. The move came despite many capable tight ends being on the market, many of whom were younger and more skilled that the highest ceiling for Tebow at the position.

It was speculated that the only reason Tebow was signed was his prior relationship with Urban Meyer at Florida. In addition, the presence of Tebow was transformative for the Jaguars for the wrong reasons. At a time they needed to be concentrating on installing their new system and having the team gel, instead there were questions about Tebow’s presence. In addition, having a former quarterback on the roster who was a lightning rod for publicity took away from Lawrence’s takeover as team leader.

The Jaguars are one of three teams to be fined $200,000 by the NFL, and Meyer is fined $100,000 personally for breaching practice rules in violation with the NFL CBA.

Tebow is cut after a disastrous preseason outing in which it became clear he had no business playing tight end in the NFL.

A report from Jason LaCanfora of CBS Sports releases hours before the Jaguars’ first game. The piece details concerns inside the organization that Meyer is rubbing players the wrong way, and already not making friends at every level. There are already signs he handles losing poorly, his temperament is annoying players, and unfamiliarity with the NFL schedule is rubbing more experienced veterans the wrong way.

Jacksonville goes on to lose 37-21 to the Texans, previously believed to be the most dysfunctional team in the NFL.

Urban Meyer is forced to answer questions about his future not even one week into the NFL season. Meyer’s name is mentioned in relation to the USC job becoming open, with some speculating that Meyer’s penchant for bailing on bad situations and changing jobs could cause him to return to college.

Jacksonville loses 23-13 to the Broncos in Week 2. A disappointing loss that could have been largely ignored, if not for Meyer and the Jaguars making a ludicrously overwrought statement on Twitter.

A message for #DUUUVAL pic.twitter.com/fmB3RGRexX

In his post-game press conference, Broncos coach Vic Fangio notes that Meyer spoke to him before their game and said that the NFL is like playing Alabama every week.

“I don’t know Urban Meyer at all really, I met him the other day, shook his hand before the game and after the game and his comment to me was, ‘Every week it’s like playing Alabama in the NFL,’” Fangio told reporters Wednesday.

The statement, while seemingly innocuous enough, saps the confidence of fans.

This time it’s a 31-29 beat down against the Cardinals. Trevor Lawrence has the worst game of his young pro career.

On a short week on Thursday Night Football, the Jaguars lose to the Bengals 24-21. The narrow loss is a sign of progress, but still underscores how Cincinnati drastically turned around under new leadership, but the Jaguars were struggling.

Urban Meyer begins trending after video emerges of him partying with a young woman in an Ohio bar.

Urban Meyer issues a public apology for becoming a distraction and showing “bad judgement” by leaving a dinner with his grandchildren to go to a bar.

Urban Meyer apologizes for “being a distraction” to the Jaguars following a viral video of him at a bar that circulated over the weekend pic.twitter.com/13ZrcsbQ2R

Despite Meyer’s claim that the locker room understood his explanation, NFL reporter Michael Silver challenges that in a Twitter thread that indicated Meyer had lost the locker room, and players have no respect for him.

In additional there are reports of numerous “closed door meetings” happening, the results of which are a statement from Jaguars’ owner Shad Khan.

That afternoon Meyer kept his regularly scheduled radio show, adding more information to the situation. The coach said he had to “regain the trust” of his players, indicating that preparations for the team’s game against Tennessee would be based more on whether the players allow him to coach the team, rather than him taking control.

Meyer on getting the team ready to play the Titans: “I don’t believe that’s in my court. … The leaders on the team are going to make that decision. It depends on how much trust you have built up with them, how we structure everything this week and focus on winning that game. …