His quote threw a hell of a wrench into a story about athletes owning guns.

Today I’d like to talk about Randy Johnson and his fastball, but also about the challenges of sports reporting.

In the course of researching Secret Base videos, I read a lot of old newspapers, and in doing so stumble across curious old stories and quotes. Sometimes those tidbits become whole videos, sometimes they turn into blog posts on this website, and sometimes we just share them in Slack or on Twitter. I don’t even remember what I was researching when I found this:

Hey good news I solved everything. Ban guns, give every home a Randy Johnson pic.twitter.com/P5nGwZXEDR

This is a magnificent quotation. No context necessary. Randy Johnson, one of the greatest and hardest-throwing pitchers in baseball history, told a reporter in 1995 that he does not own a gun, and that his method of self-defense is keeping a bag of baseballs next to his bed so he can bean intruders. Johnson even recommends that any would-be home invaders wear batting helmets, which is a hilarious image.

And of course, this was not an empty threat. Putting aside the physics of this hypothetical situation (Is Randy lying in bed or standing? How much time does he have? How close is the target?), we have ample evidence that Johnson could do some damage with his fastball if he so chose. Unlike some other fastballers, Johnson hit a LOT of batters. 190 of them, including the occasional beanball to the head. A batting helmet may have saved Mike Greenwell’s life in 1993. Most astounding to me is the pitch that fractured JT Snow’s eye socket indirectly. In 1997, Johnson delivered an errant spring training fastball to Snow’s wrist. Even after that initial contact, its force partially absorbed, the ball caromed upward hard enough to crack face bone.

And then there’s that poor bird, may it rest in peace.

But now I must circle back around to the context. We’re gonna get scary again. Sorry. A couple years after finding that quote, enjoying it, and tweeting it, I wondered to myself why Randy Johnson was talking about guns and self defense in the first place.

The original article is harrowing. I cannot find a digital, non-subscription version of the piece, so I will describe it for you. In July of 1995, Seattle Post-Intelligencer reporter Brian Knight reported on the trend of gun ownership among athletes, including some alarming incidents that year, like Seahawks receiver Brian Blades accidentally killing his cousin. Knight lists more accidents like that one, plus instances in which police found firearms while searching pro athletes’ homes or cars. Knight interviewed a sports psychologist and a cop for their hypotheses about why pro athletes might buy guns, and asked pro sports officials about each league’s gun policy. And, as is typical for such a trend piece, Knight also seems to have attended media availability for a local pro team to get some thoughts directly from athletes. It was summer, so only the Mariners were in-season. And Johnson’s goofy quote is the only one Knight published, as the final line of his deeply serious article. Here’s how it looks in context: 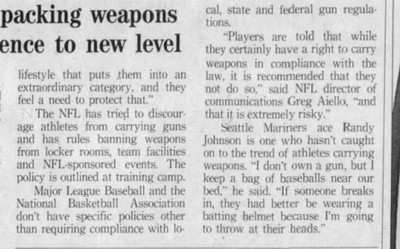 Kinda weird, and not even the weirdest application of that quote. As depicted up top, many papers published the Johnson quote in isolation, without context, in their regular round-up of one-liners and soundbites. Nowadays, a reporter might just fire the quote off as a tweet and leave it out of the article.

But any paper that published the quote in context, as the kicker to that article about athletes and guns, faced the question of whether or not to highlight that standout element. For the ones that did, the outcome is pretty jarring. The last screencap I showed you is from the second page of the article as it was syndicated in the July 27, 1995 Lexington Herald-Leader. Their editors chose to use that kicker as a pull-quote on the front sports page, too. Here’s how it looked on page C1: 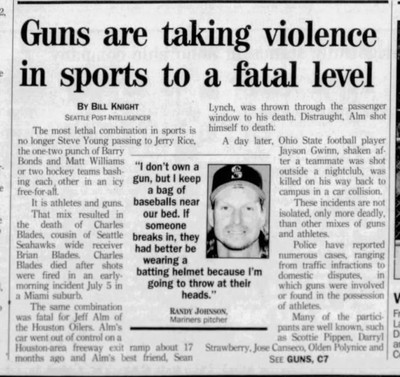 What the fuck!!!!!!!!! The quote and Randy’s grinning face are just sitting smack in the middle of a sea of text describing manslaughter and suicide. Reporters these days worry about one odd element of an article getting re-published out of context by “aggregator” websites or social media users, which can warp an item’s intended weight and meaning. I guess this is the 1995 version of that.