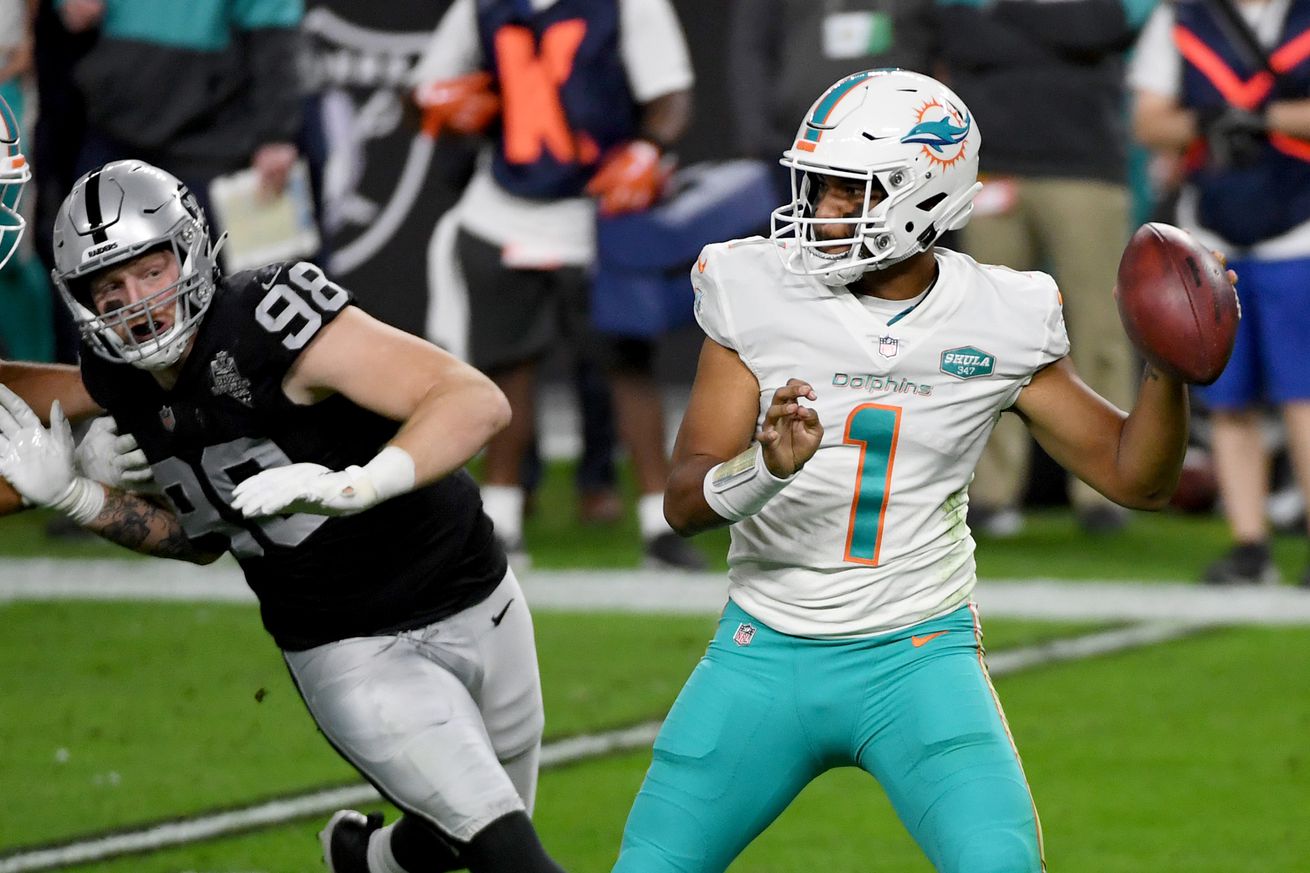 The concept of benching Tua Tagovailoa is the dumbest.

Tua Tagovailoa is the Dolphins starting quarterback, and I cannot believe we’re having this stupid discussion. This week Miami needed some late-game heroics to get them over the hump against Las Vegas in a game that essentially came down to their playoff fate, and Ryan Fitzpatrick does what he does, deliver. His ludicrous no-look pass is worthy of praise to be sure, but I am floored that there are any discussions whether sticking with Tua is the right move.

Let’s start with the obvious issue first: Asking for more from a rookie quarterback coming off a major injury he sustained in college is laughable at best. Tagovailoa hasn’t taken over the league in his first year the way many predicted, but he’s also been a damn sight better than most rookie quarterbacks entering the league. After this week’s game he now sits at 1,453 passing yards, with 10 touchdowns and two interceptions, while completing over 65 percent of his passes. The rookie is far from a perfect quarterback yet. Tua isn’t pushing the ball downfield as much as you’d like to see, but part of this is by design. One of the most important traits to build in a young quarterback is a feeling of comfort in the pocket, and you do that by allowing them to take what the game is giving them. Later, as the game slows down and they become more confident, you can start weaving in riskier plays and grow the player that way.

It’s not like this is a unique trait. In fact, the best teams at developing quarterbacks in recent years have done this. Joe Burrow posted a 6.7 yards-per-attempt (YPA) before his injury, Kyler Murray posted a 6.9 his rookie year, Josh Allen a 6.5. Tagovailoa is at a 6.3, withing the range of these guys, and arguably has far fewer weapons at his disposal. It’s a credit to how the Dolphins are bringing their rookie along, and yet there have still been people clamoring for Fitzpatrick to start.

Why would anyone want this? Yes, Miami is having success faster than anyone thought and it’s a credit to the team that they’re making the playoffs — but this is still a transitional year. The last thing the team should do is bench their rookie QB, who is gaining confidence, and pull him for a veteran who probably won’t get them any further. The Dolphins will likely get bounced in their first playoff game, and functionally that’s okay. The team isn’t in a place yet to make a deep playoff run — so benching Tua only serves to hurt him in the longterm.

Also, how many times do people need to fall for the same thing? This is the Ryan Fitzpatrick M.O. and he’s made a hell of a career off it. He travels from city to city, wowing for a few games and keeping the starting position warm, then the second a team believes in him to be their franchise quarterback and win in a big game, he blows it. I’m not talking about one play here, I’m talking about the whole situation overall.

Look no further than 2014, when the mythos of “Fitzmagic” really began. He was on the cusp of leading the Jets to the playoffs and restore hope to fans, then threw three fourth quarter interceptions in Week 17, causing the Jets to lose to the Bills, which in turn caused them to lose their playoff spot — which seemed like a lock.

The point here isn’t to dump on Fitzpatrick, as much as it is dispel this idea that the Dolphins will miss out on everything by choosing not to switch quarterback. Part of magic is wowing people, but also making things disappear, and too many times that’s been hope for teams around the league. Making a change might give the Dolphins a slightly better chance of winning in the playoffs, maybe, at the cost of hurting their promising rookie who needs the reps. The whole situation is dumb.

When Brian Flores, who might be the coach of the year, talks about the situation, he’s right.

“Tua has brought us a spark in a lot of other games. I think people will just forget that because we just remember the last thing,” Flores said. “Speculation on whatever people want to speculate about as far as what we should or shouldn’t do based on last night, I wouldn’t do that and forget the body of work over the course of the season to include the last however many games Tua has been starting [eight]. I think he’s played fairly well.”

The smart move is sticking with Tua. Kudos to the Dolphins for being smart.

Sucking is a skill, and the Jaguars know it. At this point Jacksonville knows how bad it would be to pull a Jets, and they’re not letting that happen to them. Getting blown out by the Bears is pretty much the most embarrassing way to lose, but at least it ensures you’re getting Trevor Lawrence.

The last six weeks have been tragic for Arizona. For so much of the season the Cardinals looked like a playoff lock, and that’s all evaporated. Losing to the 49ers in Week 16 might have sealed the coffin shut on the season.

It’s not just that Arizona has lost games, it’s how woefully inconsistent the team has been. Since the end of October the Cardinals have beaten the Seahawks and the Bills, two of the best teams in the league. They’ve also lost to the likes of the Patriots, Dolphins, Rams and 49ers. Truth be told, the Cardinals don’t deserve to make the postseason with their inconsistency, but there will need to be some serious soul searching this offseason.

New York absolutely blew it last week, but you know, I kind of love them going for it now. The Jets realized they were out of the tanking sweepstakes, now they’re trying to make a statement. At the very least it’s some moral victories to close out the season, and maybe make fans feel a little better about their prospects moving forward.

Who am I kidding? Fans will still be furious they missed out on Lawrence, but it’s better than nothing.

This is a disaster. No other way to put it. For so many weeks the Browns were delightfully one of the best teams in the AFC, and laying a total goose egg against the Jets could be disastrous.

Here’s the problem: Cleveland has to win to get in now. That’s the functional situation the team is in. Both the Browns and Colts are at 10-6, but next week the Colts play the Jaguars (spoiler alert: They’ll win), while the Browns will have to play the Steelers. Now, it’s entirely possible the Browns make it past Pittsburgh anyway — but there’s an allure here for the Steelers to ruin another season for Cleveland and eliminate them from the playoffs.

This would be the most disappointing end to a promising Browns season in memory. I don’t know how fans will take it if they blow this one.