Agents placing students in UK boarding schools have reported a 20% decline in the number of new students in September when compared with enrolments in 2019, according to a new survey.

The Inspiring Futures Education Agent survey was carried in August out to gauge the impact of Covid-19 on new international enrolments at British boarding schools and featured responses from approximately 60 agents from 22 countries.

Inspiring Futures Education, a company that owns Bishopstrow College and Padworth College in the UK carried out the survey.

“When you talk to agents around the world they are all having a tough time of it. You even hear stories of some agents who have gone out of business. Obviously it depends on what segment they focus on,” Mark Jeynes, director of Inspiring Futures Education told The PIE News.

“I think it is not as significant a decline as we have seen with the ELT sector because arguably secondary education is higher stakes and so perhaps there is less willingness to cancel outright.

“But clearly the industry is feeling the pain of Covid,” he said. 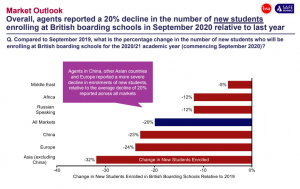 Other key findings were that across markets including the Middle East, Asia, Africa, China Europe and Russian speaking countries, 60% of responses related to deferring entry to 2021.

“Except for a small number, parents are very hesitant at the moment and most prefer to hold on,” one Chinese agent told researchers.

“Families are waiting to see if there are further spikes [in Covid-19] in the UK,” an agent from Hong Kong said. 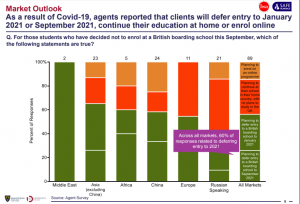 Jeynes explained that while Covid-19 has caused disruption for British boarding schools, the long term outlook is more positive.

“A lot of people are now starting to turn their attention to the September 2021 intake and recognising that hopefully by then, things will be back to normal.

“[Hopefully] then we will see an uptick in enrolments and in some cases that will also be seen in January for schools that have offer a January start,” he said.

Jeynes added that clients still value a British education and that schools face a situation where students are likely to defer, but at some stage, they were likely to return.

In an effort to tackle travel disruption caused by Covid-19, earlier this month the Boarding Schools’ Association revealed it was organising flights for Chinese students returning to UK schools.