Luz Chavez, a junior at Trinity Washington University, became her family’s only source of income after her mother lost her service job last month because of the coronavirus. A triple major in education, sociology and political science, Chavez works as a youth leader at United We Dream, an organization that advocates for immigrant rights. She’s also a part of the Deferred Action for Childhood Arrivals (DACA) program, an Obama-era policy that protects immigrants who came to the U.S. as children. It’s what allows students like Chavez to work in the country.

“It’s been very overwhelming to say the least how much this pandemic has affected my mental health, how much it’s affected my personal family,” she said. “And struggling with all that knowing the Supreme Court can rule on DACA, it’s really nerve-wracking.” 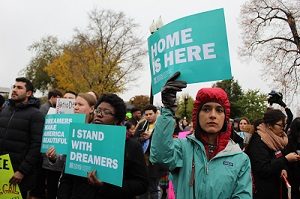 DACA students like Chavez have been in limbo for months, as the U.S. Supreme Court continues to deliberate on whether to uphold the Trump administration’s 2017 decision to end the DACA program. Now, amidst the coronavirus crisis, both DACA and undocumented students face even more questions about their future.

In many ways, the coronavirus is “exacerbating societal disparities and inequities and creating a new level of vulnerability for marginalized communities,” said co-director for the Institute for Immigration, Globalization and Education at the University of California, Los Angeles, Dr. Robert Teranishi, in an email to Diverse. “For undocumented students – a population with high levels of stress and anxiety – there is an even greater level of uncertainty about themselves and their families.”

That uncertainty is only heightened by the fact that DACA and undocumented students’ households have less access to government aid, Teranishi added. Many of their families can’t take full advantage of the key supports offered in the CARES Act, the $2 trillion coronavirus relief bill passed by Congress in March. The stimulus bill promises up to $1,200 in cash to taxpayers, but immigrant workers without social security numbers aren’t eligible. So, mixed-status families that file together can’t benefit, including U.S.-born citizens with undocumented parents, Teranishi said.

Meanwhile, some states, like California, allow DACA recipients to file for unemployment. But others do not, a challenge at a time when many are losing their jobs. In general, the coronavirus has disproportionately shuttered the kinds of employment students rely on to pay their way through school, like service and on-campus jobs.

A 2017 Migration Policy Institute study found that almost a quarter of DACA recipients work in food services, accommodations, recreation, and the arts and entertainment, and another 14% work in retail — all industries suffering during the current crisis.

Plus, roughly 29,000 DACA recipients work in health services, according to the Center for American Progress, putting them and their families at risk for contracting the coronavirus, which comes with its own set of concerns and costs. In the case of mixed-status households, undocumented family members can go to free or low-cost health clinics, but they’re rarely eligible for health insurance.

For DACA students who can’t receive federal financial aid, their incomes and their families’ incomes are often crucial to continuing their education.

“The economic burdens of this are extremely difficult for DACA students who are often a part of families that are very precarious financially,” said Dr. Daniel Morales, associate professor of law and George A. Butler Research Professor at the University of Houston Law Center. Now, “we’re looking at an extraordinarily precarious population facing the ultimate precarity, which is their status being taken away by the Supreme Court.”

If the financial challenges weren’t enough, DACA students fear the possibility of their status being revoked during the pandemic. The U.S. Supreme Court began its oral arguments on the future of the DACA program in November, but the court has yet to decide whether to support the Trump administration’s 2017 attempt to curtail the program.

Lawyers filed a letter to the Supreme Court on behalf of DACA recipients in March asking for a delay on their decision.

The crisis “throws into sharp relief DACA recipients’ important contributions to the country and the significant adverse consequences of eliminating their ability to live and work without fear of imminent deportation,” the letter reads.

But still, the Supreme Court’s timeline remains unclear, leaving DACA recipients with a worrisome “what if” scenario.

For DACA students, a Supreme Court decision to end the program would be an “emotional catastrophe” in the best of circumstances, Morales said, let alone amid a global health crisis.

He advises that universities offer direct outreach to DACA students, checking in and explaining what support they have available at this time, given that students can withdraw when juggling other priorities. Plus, it’s even harder for them to seek support now that campuses are closed and “they don’t know where to go.”

A targeted, proactive approach with a “personal touch” can probably go a long way, Morales said, “not just saying you’re available but being present and available to the extent possible.”

Chavez and a coalition of students have been working with Trinity Washington University on its grading policies during the pandemic, and she encourages universities to be flexible with grading for online courses, because students might “not be in the right headspace” to succeed. She’s found it difficult to focus, knowing she could lose the ability to work or her protection from deportation when her family is depending on her.

Sara Weissman can be reached at sweissman@diverseeducation.com.