Latest News
Home /Browns OL Jedrick Wills Jr. is a starter, but he comes with a risk 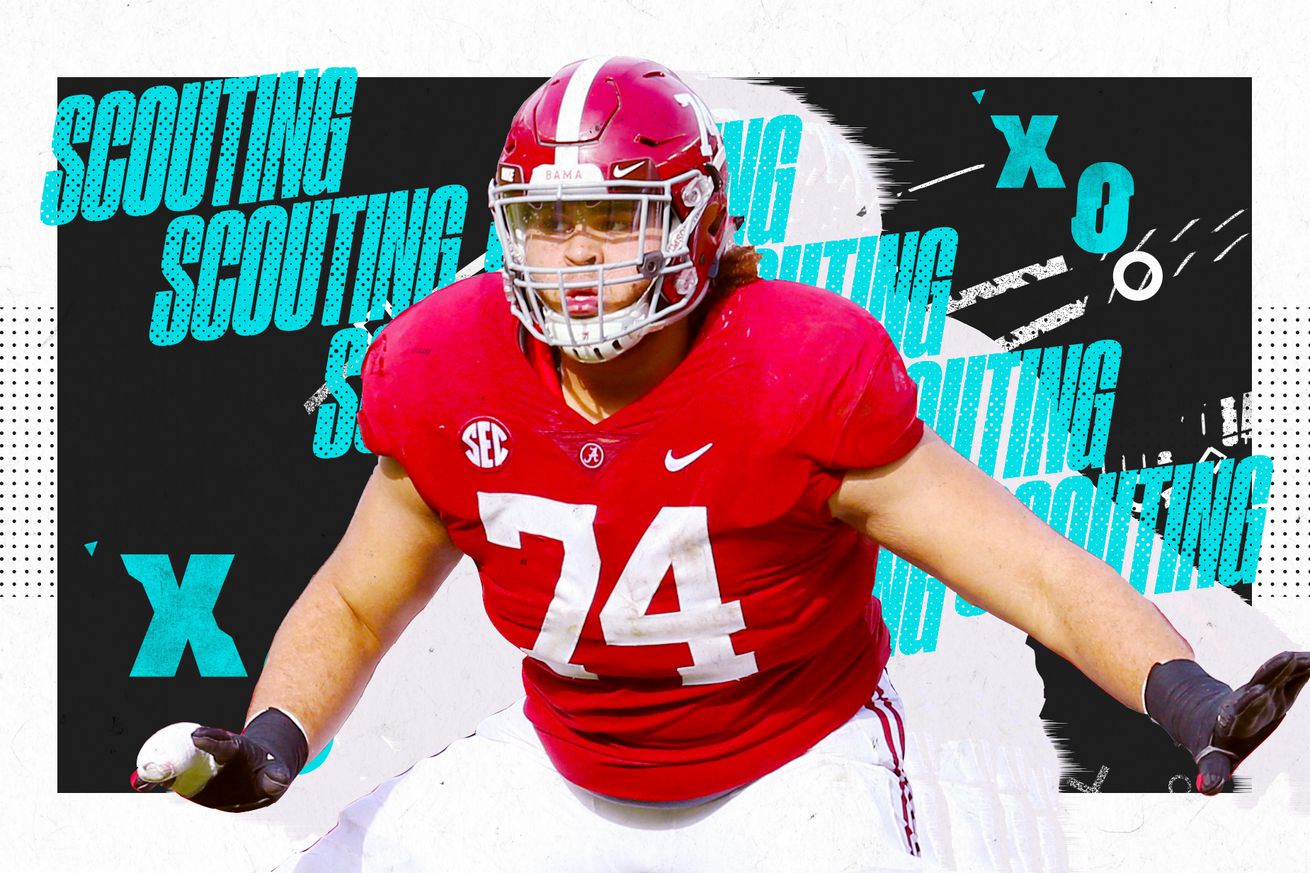 Jedrick Wills Jr. is one of the top OT prospects in the 2020 NFL Draft.

Retired defensive end Stephen White explains why there’s a lot to like about Alabama’s Jedrick Wills Jr. — and one reason to be concerned.

The Cleveland Browns selected Jedrick Wills Jr. with the 10th overall pick in the 2020 NFL Draft. Here’s what Stephen White had to say about Wills ahead of the draft.

Jedrick Wills Jr. was a supremely talented right tackle for Alabama this past season. I want to be clear on that point first thing. But while I was blown away by some of what I saw on his tape, I still came away having a few concerns about him as an NFL prospect.

Before I get into any negatives, I want to highlight Wills’ strong points, because there are plenty.

On his best plays, the guy was a damn monster who looked like one of the best offensive linemen I have ever evaluated.

On some running plays, the 6’4, 320-pound juggernaut looked every bit as powerful as Jawaan Taylor was on tape. On some passing plays, Wills’ pass set was every bit as technically sound as Ronnie Stanley’s a few years ago when he came out. Some of his downfield blocks were every bit as ridiculous as the ones Greg Robinson made in college back in 2013.

As a matter of fact, if Wills were just a little more consistent, I wouldn’t have had any problems making a Quenton Nelson comparison with him. Not that they are the same type of player, but they were both good enough to dominate right off the bat in the NFL. Even now, I would still say Wills has a similar type of versatility; I would be comfortable with him coming in and playing either tackle or guard position right away. Hell, I wouldn’t be surprised if he could play center, too.

If he can find that next level of consistency, you’re talking about Wills as a potential All-Pro type of player.

What Wills does well: Run and pass block

As a run blocker, Wills was an assassin on the second level. He would bump the hell out of the first guy at the line of scrimmage initially; then, when he scooped up to linebacker depth, that was your ass, Mr. Postman!

I swear, Wills would treat them dudes like he had heard they were talking bad about his mama!

But it wasn’t just the intensity of those blocks that impressed me. Wills showed good technique and athleticism. He stayed under control until he was within striking distance, then took his shot with almost perfect timing.

That’s at least partially why I feel like he could move inside to guard. In the NFL, Wills’ short-area quickness becomes a huge asset. He moves more like a defensive lineman (sorry, not sorry) and with his kind of power and explosion out of his hips, I think he could be pretty damn dominant at guard.

Not that I think his new team would have to do that.

Usually, I associate bumping a guy inside with him struggling as a pass protector, but with Wills, I think he could play either position about equally as well. It’s actually a compliment rather than a diss.

Gone are the days when most good teams would consider drafting a road-grading right tackle who can’t pass block in the first round. When we say it’s a passing league, that means more than just the quarterback and skill positions. If you can’t protect your quarterback for 45-55 (maybe even 60) passing plays in this era, you won’t last very long.

With Wills, I don’t really have those concerns. His athleticism jumped off the screen, but he didn’t try to rely solely on that when trying to keep pass rushers off his quarterback. His kick step was fluent, consistent, and at just the right angle backward, which allowed him to be patient.

He was also frequently able to keep his shoulders square to the line, while bailing out fast enough to turn and force speed rushers deeper than the quarterback at just the right moment.

Waiting like that takes nerves of steel, because if you wait a hair too long, or you don’t make solid contact with the pass rusher, your quarterback ends up on his ass. But Wills literally didn’t give up a pressure on a single speed rush in the four games I watched.

What Wills does well: Switch up his timing

Wills’ punch is NFL ready and a major reason why it’s so hard to get around him. Not only does he have a good sense of timing on when to shoot his hands, he’s also explosive enough to shove guys well off track as they try to run around the edge.

However, where he gets next level is Wills already knows how to switch up his timing on when he shoots them.

I can tell you as an old pass rusher who was coached by one of the best defensive line coaches in NFL history, there is nothing we love more than for a guy to throw their punch on a count that we can pick up on. When someone switches it up like Wills, it can throw your whole pass rush plan off — not only for that play, for the rest of the game as well.

I actually saw Wills jump set a dude one play, then keep his hands back until the very last second on the next.

You know how frustrating that can be when a pass rusher is trying to target a tackle’s hands? There are starting NFL tackles now that don’t switch it up with their punch as well as I saw Wills do it on tape.

Mind you, these were all Power 5 conference players he was shutting down around the corner. While there will be a jump in competition for him once he plays against NFL edge rushers, it won’t be a huge one. He’s ready to roll right away for whomever takes him, wherever they put him.

Where Wills can improve: Effort

Now that I’ve got that out of the way, let me express my concerns. Well, it’s kind of two concerns in one.

Wills didn’t get beat often in those four games, but he did give up four pressures, as well as losing on three other plays that could’ve resulted in pressures if not for his teammates’ efforts. I already told you that I didn’t see him lose a speed rush, so that means all of his losses came on inside moves.

Two of the seven losses were on spin moves by the pass rusher.

After watching his tape a few more times, it was clear the issue wasn’t spin moves or technique. The problem started to look like one rooted in lack of effort on those plays.

From everything you’ve read up to this point, it should be obvious that Wills’ tape overall showed him to be more than talented enough to be a top-16 pick in this draft. However, if there’s one thing that makes me skeptical of an NFL prospect, it’s a lack of effort. To the extent that being a “bust” is even a real thing, I would be willing to bet that, aside from injury, nothing derails a player’s career more than a lack of effort. Or should I say a lack of appropriate effort.

And this is where it gets tricky.

For players selected in the first round, it’s almost a given that they have a lot of talent before they ever put on an NFL uniform. It is also safe to assume they’ve been dominant for most of the time they’ve played the game. They are usually guys who can ball out even when they weren’t going quite their hardest.

But I don’t know if y’all are ready for that conversation.

Here’s what it boils down to for me. On several of the plays where he was beaten inside, Wills obviously relaxed at some point during the play. There were also a few plays I saw where he was blocking one guy pretty well, but then after a while he would start looking around behind him, as if trying to see if the ball had been thrown or something.

At the same time, after thinking it through, the reason why those plays stuck out so much to me is because they were anomalies. On probably 97 percent of the plays I watched, Wills’ effort was appropriate, if not always outstanding.

So the question I would have if I were in a position of picking him in first round (especially in the top 16) is: did his motor really run hot and cold sometimes? Or was it just a matter of, for lack of a better term, him being “bored” playing against dudes who he had an easy time of blocking? The answer to that question is what I’d be seeking when I talked to his coaches, some of his teammates, and Wills himself.

If I heard it was the former, I would probably pass if I were drafting that high. Yes, I know how hard it is to find a good offensive tackle these days, but it might be worse to draft the wrong one high and be stuck with him for at least a few years. Your starting quarterback definitely ain’t gonna be happy about it, I can promise you that much.

But if it’s the latter, as I suspect it is, I would give him a pass with the understanding that those days are over. I don’t really think anybody will have to tell him that once he gets to the league and starts taking on NFL talent. You get caught slipping on one play and your season might be over in a flash with your quarterback going down.

But, if he can get his motor to run just a tad bit more consistently, you’re talking about a guy who could be a game changer up front for any team.

Wills is talented enough to be in the NFL for a long time at multiple positions. I don’t see him actually getting out of the top of the first round, regardless. And just to reiterate, I lean a lot more toward boredom being the answer to those lapses. So if that is actually the case, then why not take him early?

Wills has the skillset, size, and technique to be at least a quality starter from day one. His 5.05-second 40-yard dash and 34.5-inch vertical at the combine just confirmed what’s already on the tape. With someone like that, I’d be willing to bet that years from now, the general managers who pass on him will end up being the ones getting second-guessed rather whomever turns his name in on draft day. I predict the number of GMs who pass on him will not be very high when it’s all said and done, however.

Be sure to check out my other scouting reports on Chase Young, Jerry Jeudy, and Derrick Brown.

For the purposes of this breakdown, I watched Wills play against South Carolina, LSU, Auburn, and Michigan (Citrus Bowl).